I’ve been working on iPad full-time for a while now, and it’s always a source of surprise when I talk about it with other people. This post aims at summarising the why behind this preference of mine.

I spent 2019 on the Turkish West Coast, in a small town near Izmir. It’s a lovely place where everyone knows each other, and where we now have friends and people we care about.

I was working as a backend engineer on PSPDFKit Server, a product written in Elixir and packaged via Docker, on my trusty old 2014 11” Macbook Air. A wonderful machine - powerful for its size, and featherweight.

Around April, a few things happened at the same time:

It quickly became apparent that I was asking too much out of my laptop.

As I’ve been writing software in the shell for years, I switched to a remote setup using a powerful remote server. 32 cores, very large bandwidth, almost the same experience as working locally (if you take into account the occasional latency problem, well mitigated by mosh).

Screen size, however, became an issue: 14pt on a 11” screen is crammed, and difficult to use.

I thought about purchasing a new laptop, but doing that from Turkey proved to be difficult, because of the different keyboard layout.

I decided I would try a week long experiment using the other device I had, a 3rd generation 12.9 iPad Pro (with its keyboard) which I mainly used for entertainment. I figured that given my remote development setup, I could still get things done.

The experience was great: I loved the screen size and ratio, and the retina screen made text very easy to read (to the point that I could go back to 12pt, which worked really well in terms of information density). I could work the entire day without worrying about the battery, and enjoy the spring/summer season.

While coding was (surprisingly) pleasant considering the fiddly setup, other activities were proving to be more difficult: apps like Slack and Google Docs were (and in some cases still are) cumbersome to use, with very little support for keyboard shortcuts, and of substantial inferior quality compared to their desktop counterparts. I got by, occasionally dusting off the Macbook Air for specific tasks that wouldn’t work at all on the iPad (e.g. work that required using the Chrome Web Inspector).

Then February 2020 came, we moved back to England and the pandemic started. Like many others, we spent most of our time at home, where I could use a decent Mac Mini with a nice keyboard and external screen.

Despite this change, a seed had been planted in my head: could an iPad eventually replace a desktop computer altogether for a “hardcore” user like me?

Around spring 2020, my role changed, and I started managing a team. Coding became a past-time activity that I kept maintaining for fun, and 99% of my work now involved planning, communication with people, and some form of documents and task lists.

In December 2020, a family situation forced us to quickly pack our bags and fly to Turkey again. I ended up taking with me all devices (which sounds ridiculous - I know).

The following months are a blur - I remember working from all sorts of places: the car, parking lots, hospital cafés, the balcony table, hotel rooms. I once had a meeting in a service station.

That’s how the iPad came back in full force: always on, always charged, with data always in sync. Pair it with the Apple Pencil, and a pair of earphones, and it gave me the ability to adapt work to a complicated personal life.

I was happy to see that software had gotten better: Safari gained a desktop mode which supported all sorts of complex web apps, and all other apps improved to the point of being at least usable (Google Docs, I’m looking at you). Notable mentions go to Agenda, Mindnode, and Fantastical, which set a very high bar for quality software in general.

Later in the year, things started to calm down and even if I could use the Mac Mini, I would prefer the iPad. I invested in a desk stand which would let me prop it to a decent height, connect it to a good keyboard and mouse, and happily went about my work day. 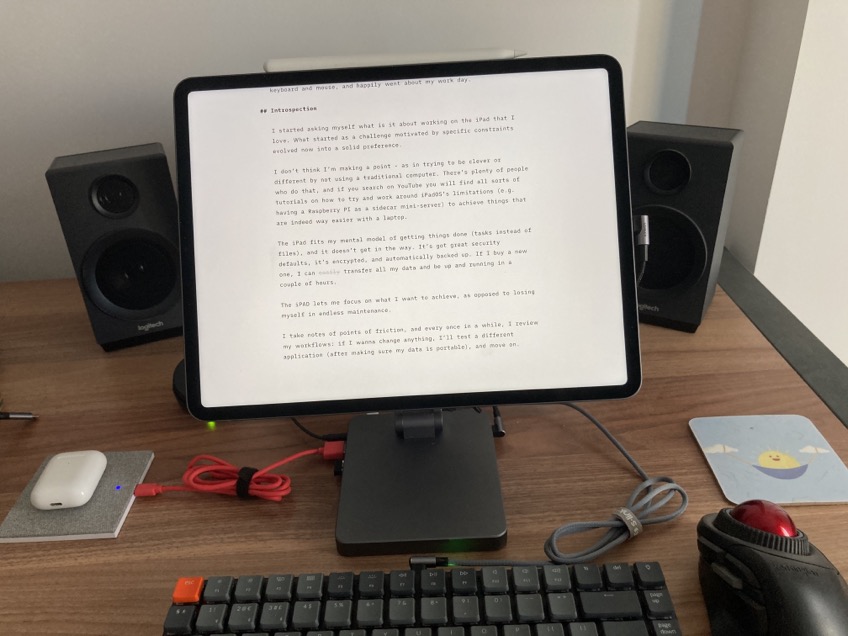 I started asking myself what is it about working on the iPad that I love. What started as a challenge motivated by specific constraints evolved now into a solid preference.

I don’t think I’m making a point - as in trying to be clever or different by not using a traditional computer. There’s plenty of people who do that, and if you search on YouTube you will find all sorts of tutorials on how to try and work around iPadOS’s limitations (e.g. having a Raspberry PI as a sidecar mini-server) to achieve things that are indeed way easier with a laptop.

The iPad fits my mental model of getting things done (tasks instead of files), and it doesn’t get in the way. It’s got great security defaults, it’s encrypted, and automatically backed up. If I buy a new one, I can easily transfer all my data and be up and running in a couple of hours.

The iPad lets me focus on what I want to achieve, as opposed to losing myself in endless maintenance.

I take notes of points of friction, and every once in a while, I review my workflows: if I wanna change anything, I’ll test a different application (after making sure my data is portable), and move on.